Heavy rain batters Sydney with the worst yet to come

Heavy rain batters Sydney with the worst yet to come

Heavy rain has hit Sydney but forecasters are warning ever worse is yet to come for New South Wales.
The weather event hit earlier than expected today, with almost 100 millimetres of rain falling on the city’s north since 9am.
Belrose, in the north-east, recorded 92 millimetres of rain since 9am while Mona Vale, in the Northern Beaches, was close behind at 62 millimetres and the city centre copped 40 millimetres.
More rain is expected over the next 48 hours.
There are major concerns for catchments in the city’s north-west and Hawkesbury Nepean, where the dams are full which could cause flooding.
Warragamba Dam, which is currently at 100 per cent capacity, is set to spill on Friday due to the incoming rain bomb.
The Bureau of Meteorology (BoM) has reissued a severe weather warning from Gosford to Bega.
“Six-hourly rainfall totals between 60 to 100mm are likely, reaching up to 140mm over coastal areas,” the BoM said earlier in the day.
The Northern Beaches experienced the first wave of the rain event, with more than 70 millimetres in just three hours.
The NSW State Emergency Service has received 25 requests for help and are warning residents of possible flash flooding.
The Wakehurst Parkway through the Northern Beaches was forced to close in both directions due to flooding.
Meteorologist Sarah Scully said flood watches were in place for the central and south coast.
“Heavy and persistent showers over the next couple of days will increase the risk of flash flooding,” she said.
She also flagged the risk of severe thunderstorms in the north-east of the state on Friday.
The region has already been hit by devastating floods twice in a month, with recovery efforts from those emergencies still underway.
The new rain “is not expected to produce riverine flooding instead it will be more localised flash flooding,” Ms Scully said.

‘I don’t think our communities can take much more’

Chloe Konispoliatis, from McGraths Hill in Sydney’s north-west, said she was “terrified” to see the rain return, fearing her home could be flooded for a third time in less than two years.
“We have only just started to get our life back together,” she told Today.
“We managed to clean quite quickly this time around, because we, unfortunately, were impacted by the floods last year as well.
“This year we were a bit more prepared.”
She said she was “constantly” keeping up with weather updates and watching the river levels.
In the recently-ravaged Northern Rivers region, Wardell woman Rebecca Heywood is also facing another round of heavy rain, after her cottage was damaged by floods last month.
“We’re looking at round three here for our communities of Wardell, Broadwater and Woodburn,” she said.
“Unfortunately, we live on cane paddocks here.
“The cane drains are full. They are blocked.
“They can’t get out to the river. So, we’re already full here.
“Any more rain and we will flood very easily.”
She said the community needed support and help to open the floodgates to the cane drains, which was a bureaucratic battle local farmers had been fighting for 10 years.
“We need approval to get the drains open and working and functioning now so that this doesn’t happen again. We can’t go through any more red tape,” she said.
“I don’t think our communities can take much more.”

How much rain will there be?

The BoM late yesterday warned heavy rainfall, possibly leading to flash flooding, was forecast from Wednesday afternoon about the Illawarra and parts of the South Coast and Southern Tablelands.
The heavy rain is expected to extend Metropolitan and parts of the Central Tablelands and Hunter districts.
Meteorologist Ailsa Schofield said the heaviest rainfall was expected tomorrow.
“On Wednesday we might see rainfall total in excess of 100mm,” Ms Schofield said.
“On Thursday we might see rainfall totals in excess of 200-250mm.
“On Friday we will see higher rainfall totals in excess of 150mm.”
Ms Schofield warned moderate flooding could occur in the Upper Hunter, Hawkesbury and Nepean valley, as well as the Colo River.
She also said minor flooding could occur in the Illawarra, South Coast and Far South Coast.
“The catchments are very wet it won’t take much rainfall to see flash flooding,” she said.
Not only is heavy rainfall predicted, but more damaging winds and large waves will pummel the NSW coast.
“This surge of wind and swell are being caused by a tropical cyclone moving south across the Coral Sea and pressing against a high pressure system in the southern Tasman Sea,” Weatherzone meteorologist Ben Domensino said. 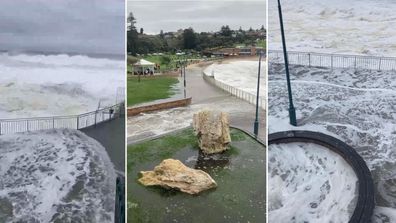 Massive five-metre waves batter Sydney’s beaches
View Gallery
Waves could reach highs of up to two to three metres later this week and NSW coastal residents are warned of the risk of erosion.
“While this swell will be smaller than the waves that inundated the state’s coast last weekend, they may still cause erosion in some areas,” Mr Domensino said.

Rain and thunderstorms are also expected to develop over southern Queensland between today and the weekend.
“Rain and thunderstorms will linger over parts of eastern and south-eastern Australia into the weekend, and some of these storms could also become severe,” Mr Domensino said.
Some of the rain in Queensland has been brought by Tropical Cyclone Fili near New Caledonia.
The cyclone is forecast to drift south but will remain “well offshore” the coast of Queensland, BoM meteorologist Helen Reid said.
Queensland’s coast will also experience hazardous surf.
“Swells are expected to be an easterly three-metre with long period, generated by a combination of Tropical Cyclone Fili and a high moving into the Tasman Sea,” Ms Reid said.
Some flood warnings also remain in place in southern Queensland, including the Condamine catchment, but the forecast rain could cause more flooding later this week.
Share. Facebook Twitter Email