Annastacia Palaszczuk has split Queensland in two after calling a press conference in response to a crisis and making a major statement.

The press conference in Brisbane’s flooded northern suburbs went for 40 minutes, but Annastacia Palaszczuk cut to the heart of the crisis in just a few words.

“It’s unprecedented,” the Queensland Premier said, before pausing for the press pack.

“Let’s face it, it is climate change.”

For many, it was a frank and forthright assessment, and one that stood out in a political environment often reluctant to accept the link between human activity and the onset more frequent, severe natural disasters.

For others, however, Ms Palaszczuk’s words were nothing but media-friendly rhetoric at odds with her government’s staunch backing of the carbon-intensive coal and gas industries.

In the latter camp is Queensland Greens MP Michael Berkman, whose inner-Brisbane electorate of Maiwar was among the harder hit by the late-February rain bomb that wrecked the state’s southeast. “My constituents in St Lucia, Toowong, Indooroopilly, Auchenflower and others were in harm’s way. Our job as reps is to keep them safe, but right now the Queensland government is making the next floods worse,” he said.

The Queensland government and its backers can quite rightly point to hefty recent investments in green manufacturing projects and renewable energy infrastructure, as well as things like its landmark electric vehicle plan, as evidence of how it is helping the state transition to a new, cleaner economy.

It is also true that in acknowledging the link between climate change and the Queensland and NSW “megafloods”, Ms Palaszczuk met a pledge the Climate Council has been pushing ahead of the upcoming federal election.

But for the strength of the state government’s convictions on emissions reductions and jobs in green industries, questions regarding coal and gas projects – both existing and proposed – often prove uncomfortable.

Ms Palaszczuk demonstrated as much later in her press conference. The Greens say Premier Annastacia Palaszczuk has been hypocritical in her acknowledgment of climate change as a factor in the recent flooding. Picture: Liam Kidston

Shortly after lamenting the impact of climate change, she declined to answer directly whether the floods would prompt her government to rethink its emissions targets or fossil fuel output.

“Queensland is lucky, we have coal, we have gas, and we have huge renewable investment, which is going to really rapidly increase over the next 10 years,” she said.

“Queensland is, in fact, a leader”

Coal is certainly a crucial plank of the Queensland economy, but is also widely recognised as the dirtiest fossil fuel, and the International Energy Agency warns it is a resource that should be rapidly retired if the world hopes to limit global warming to 1.5 degrees and prevent further catastrophes.

Meanwhile, coal seam and liquefied natural gas are other key industries in Queensland often lamented for being a major source of emissions, as well as being potentially hazardous to the environment.

But Ms Palaszczuk has consistently pointed to the importance to both resources heading forward, while her government on the eve of the 2020 election backed Adani’s controversial Carmichael mine in central Queensland, and late last year also granted several petroleum leases for Origin Energy across environmentally sensitive Channel Country. Coal is a crucial plank of the Queensland economy and provides crucial employment opportunities in several regions. Picture Cameron Laird

When asked by NCA Newswire if the recent floods would factor in to the approval of pending coal projects – which include an extension to New Hope’s New Acland mine, Whitehaven Coal’s Winchester South project, and Glencore’s Valeria mine – government did not answer directly.

It also did not say whether the flooding had changed its thinking on the lifespan of its coal-fired power plants, or whether it would be accelerating its 2030 emissions reduction target of 30 per cent, a goal only slightly better than the federal government’s 26 per cent target.

“The Palaszczuk Government is committed to 50 per cent renewables by 2030 and net zero emissions by 2050,” a spokesman said.

“Queensland is, in fact, a leader when it comes to renewables including in rooftop solar.

“While this transition underway, more traditional forms of generation will be required.

“All of Queensland’s resources will form part of our energy mix going forward.” Flooding through Vincent Street in Auchenflower. Picture by Richard Walker

Ultimately, Mr Berkman said the state government spoke as if it was treating climate change seriously, but not seriously enough to improve its emissions reduction targets, or hasten any effort to wean the state off coal and gas projects.

“I think there’s a really deep hypocrisy in what the Premier is saying,” Mr Berkman said.

“On the one hand, she’s accepting with no hesitation that the flooding we’ve seen over the last couple of weeks is directly attributable to climate change.

“But on the other hand, she’s taking none of the steps necessary to prevent these disasters getting even worse over time.”

Matters of climate and emissions were a hot ticket news item in the lead up to November’s COP26 summit in Glasgow, and in Queensland there was a flurry of activity.

Media conferences heralded iron-ore-magnate-turned-green-energy-philanthropist Andrew “Twiggy” Forrest when he popped into town to announce the world’s biggest hydrogen electrolyser plant would be built in Gladstone – in partnership with the Palaszczuk government – while his Fortescue Future Industries would also be working with fertiliser firm Incitec Pivot to prove it was technically and economically feasible to accelerate decarbonisation while protecting jobs.

Ms Palaszczuk that week also goaded Prime Minister Scott Morrison for his apparent reluctance to head to Glasgow for the landmark climate conference, and revelled in committing to a 2050 net zero emissions target almost two weeks before he was able to. 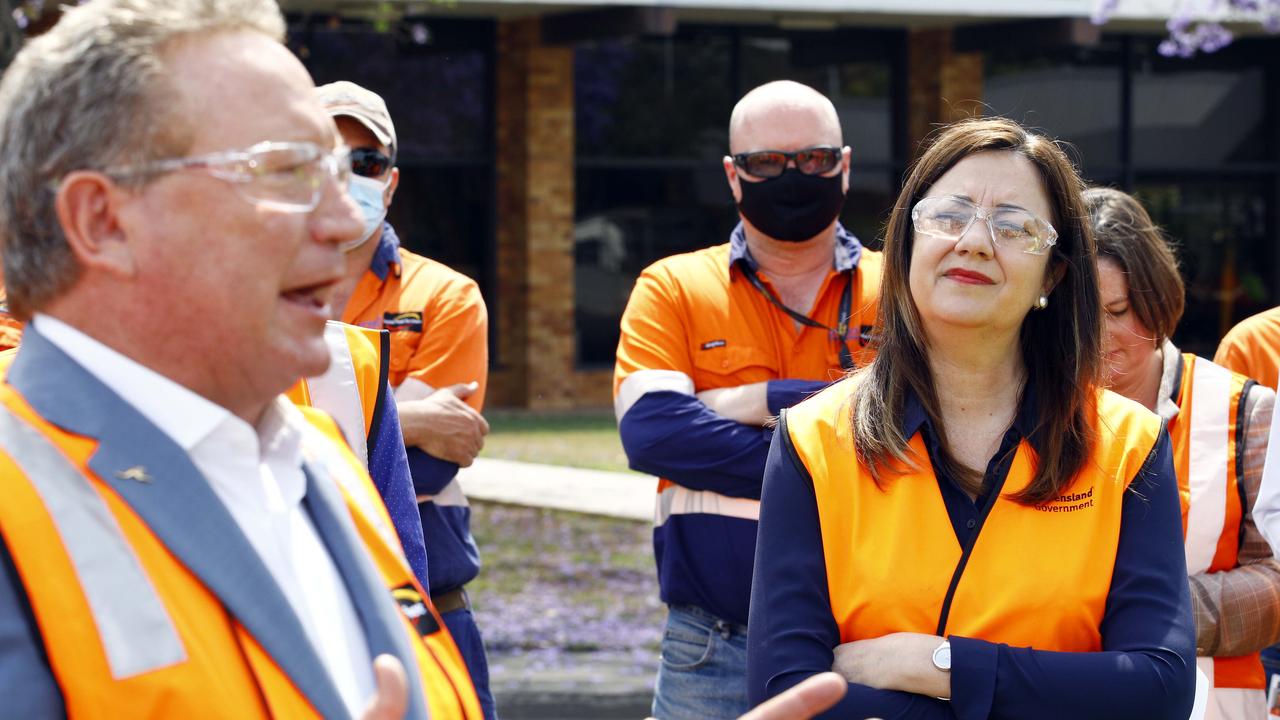 However, just two weeks after COP26, Ms Palaszczuk was assuring the local resources sector it would continue to receive support and investment.

The Premier told the Queensland Resources Council any plan to move away from fossil fuels did not mean a “zero-sum game” between action on climate change and mining jobs and that it was possible to become a “clean energy superpower” while also extracting “resources below the ground”.

“I am confident that our best days remain ahead of us,” she told the peak mining body.

Ms Palaszczuk celebrated the Millennium coal mine and expansion of the Isaac Plains coal mine, but also noted that vanadium and cobalt projects were underway to support the production of battery metals and, ultimately, the renewable energy transition.

“As a key input for steel, Queensland’s metallurgical coal will continue to support the construction of wind turbines across the world,” she said.

“The Queensland resources sector has a critical role to play in ensuring that renewable energy is delivered affordably and sustainably.”

“Coal billionaires made the mess”

Queensland Conservation Council energy strategist Clare Silcock says the state, while having the highest current emissions, also has the greatest potential for renewable energy industries of the future.

But she wants to see more ambition from state government on emissions targets and fossil fuel transition. The Queensland Premier says any plan to move away from fossil fuels did not mean a “zero-sum game” between action on climate change and mining jobs.

“But the science is pretty clear that we need to see a much greater reduction in emissions in the next decade … reaching up to 75 per cent emissions reduction by 2030 to be able to be on a 1.5 degree compatible path.”

“Also, live projects like the Bowen Basin gas pipeline, that have been framed as emissions reduction opportunities because they will could reduce fugitive emissions from coal mines slightly… are actually incompatible with a net zero future,” Ms Silcock said.

“A lack of plan is going to really hurt communities that are currently involved in fossil fuel mining and generation.

“This transition is inevitable, and don’t have a plan that will make it harder for people to be able to access new opportunities like these hydrogen announcements.” “Coal billionaires made the mess, but it was my constituents out shovelling the mud,” says Brisbane-based Greens MP Michael Berkman. Picture: Richard Walker

This week in parliament he asked the Premier whether the next floods would be more deadly and destructive if coal and gas were not phased out by 2030.

Ms Palaszczuk responded by highlighting renewable energy agenda and a need to protect the Great Barrier Reef, while noting climate change would be an important focus for the upcoming federal election.

Mr Berkman was not convinced.

“Coal billionaires made the mess, but it was my constituents out shovelling the mud,” he said

“That terrible plan to keep burning coal makes more sense when you realise that Queensland Labor’s overall targets for pollution cut are almost identical to Scott Morrison’s and Tony Abbott’s.

“Of course, all of this doesn’t even touch the approvals for coal mines and gas fracking that Labor is handing out like candy to the fossil fuel industry.

“That pollution (mostly) happens overseas when the coal and gas are burned, but it’s far larger than Qld’s domestic emissions.”