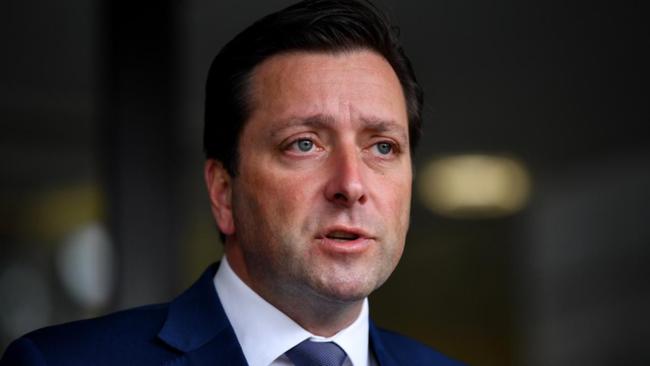 The Victorian opposition has changed its stance on the state’s emissions targets after campaigning against them at the last state election.

If the coalition wins the Victorian election in November, Opposition Leader Matthew Guy confirmed the Liberals and Nationals won’t rip up the government’s target to reach net zero emissions by 2050.

It will also pursue Labor’s non-legislated pledge of a 50 per cent emissions cut by 2030, accepting the government’s position it can be achieved on “face value”.

“We are seeking to be sensible in this debate, and if that means committing to that is sensible then we’ll do it.”

Before the last election, Mr Guy vowed he would scrap Labor’s emissions targets in preference of a national approach if the coalition regained government.

But the Andrews government was conformably returned for a second term, with Mr Guy stepping down as leader and the opposition’s policy left in limbo.

Mr Guy claimed the coalition adopted the net zero by 2050 target around the time then-leader Michael O’Brien announced a “waste-to-energy” plan in November 2019, when he was on the backbench.

But there is no mention of it on the Victorian Liberals’ policies website or opposition media releases involving energy or environment announcements since the 2018 election.

In light of the revelation the opposition now backed it, the Victorian government labelled the commitment a “backflip on renewable energy” and “desperate stunt in the lead up to the election”.

She said the state coalition was lagging behind their federal colleagues in Canberra, who reached an net zero by 2050 pact before last year’s Glasgow climate summit after pushback from Nationals MPs including leader Barnaby Joyce.

“This is even later than (prime minister) Scott Morrison coming out saying he’s going to have a net zero emissions cut by 2050,” she said.

“Scott Morrison – the person who held up a piece of coal in the Australian parliament. Not only are they late to the party, but they’ve actually missed the bus.”

Premier Daniel Andrews questioned the motivation and timing of the apparent about-face, highlighting the independent campaign of former ABC reporter Zoe Daniel to oust Liberal MP Tim Wilson from the bayside Melbourne seat of Goldstein at the upcoming federal election.

“I tell you what, Zoe Daniel’s got them very worried hasn’t she? Federally and it seems at a state level,” he said.

The fresh focus on climate action comes after the Victorian government last week announced a series of minimum offshore wind production targets, including an initial goal to use the renewable resource to power 1.5 million homes in the state by 2032.