By adminFebruary 28, 2022No Comments5 Mins Read

Monday’s turnout was labelled a “really good start” after months of remote working — but the opposition has dubbed it a “fizzer”.

With coffees and mykis in hand, workers have been streaming into Melbourne’s CBD on Monday after two years of on-again, off-again work-from-home orders.

It comes as 5852 new Covid cases were announced, along with three deaths.

There are 283 patients in hospital and 42 receiving intensive care, of which seven are on a ventilator.

In the city, Flinders Street Station was buzzing once again at 8.30am as busy baristas fired out coffees to queues of city workers.

Those on their return to the office on Monday had mixed feelings about the change.

Yuka Suzuki, who works in a travel agency in the CBD, said while she wasn’t thrilled about the commute to work, it was nice to change things up. 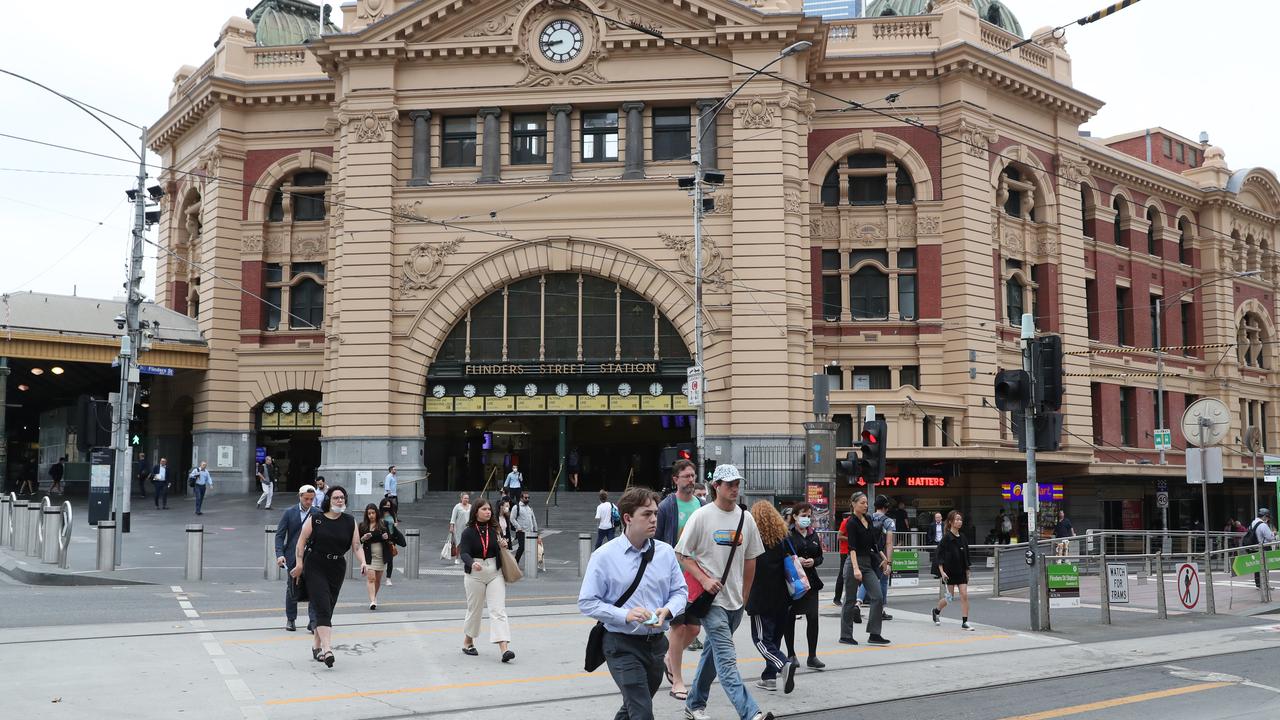 Workers trickle back into the city on Monday. Picture: David Crosling Martin, who was also heading into his first day back in the office agreed, calling the commute a waste of time.

Speaking about working from home, he said: “You get to your desk earlier, you’ve got two hours’ less commute … it’s better for mental health and you’ve got a really good family-life balance”. The return of workers has been welcomed by traders. Picture: Ian Currie

Lord Mayor Sally Capp said the city had recorded a 30 per cent increase in foot traffic outside major train stations in the CBD on Monday.

“It is a big stride forward, literally, for the future of our city and we say thank you to everyone who’s come in on a Monday to return to their city workplaces,” she said.

Cr Capp said flexible working arrangements should be embraced going forward, with a City of Melbourne survey finding that 54 per cent of respondents planned to still work from home in some capacity.

“It’s here to stay. We know that it’s a new rhythm for the city,” she said.

“At the end of the day, we want people to want to come back to work … This transition isn’t about a blanket response, it’s not about a shared policy across workplaces. It is going to be very nuanced.

On average, about one million people came to the city every week prior to the pandemic, according to the City of Melbourne.

Cr Capp said a greater “sense of confidence” could now be felt around the CBD, with the shadow of the Omicron wave having passed.

“We understand that health and safety must remain a priority but we can see now that there’s definitely a shift from that Covid caution to Covid confidence,” she said. Opposition spokesman for business and CBD recovery David Southwick said the government needed to implement a plan that ensured workers were brought back to the CBD on Mondays and Fridays.

“With several unworkable mandates now lifted, we need a positive plan to support public servants, workers, shoppers and visitors back to our CBD,” Mr Southwick said.

“Workers across the public and private sectors should be supported to return to the office, including with free public transport, small businesses support and other incentives.

“The Andrews government must now lead by example and work with the public service to implement hybrid working arrangements that ensure a consistent level of in office staff throughout the week.”

But Victorian Chamber of Commerce and Industry chief executive Paul Guerra said there was “certainly a lot more foot traffic” in the CBD on Monday morning.

Mr Guerra said he sensed a 20-25 per cent increase compared to other Mondays.

“Mondays are traditionally the slowest day in the CBD so I’d expect to see that increase,” he said.

“We know this is going to be a gradual return but today is a really good start. Commuters piled on to trains and trams during the morning peak hour. Picture: David Crosling

“I think most workplaces that I’ve spoken to are going to target that three days a week in the office and two days at home to get that blended environment.”

Mr Guerra said being able to take masks off in the office was the “sole reason” that people felt comfortable to return to their desks.

“What we want to see now is masks off for retail and hospitality workers as well,” he said.

“It’s great to see the energy return back to the city,” he said. “You feel for small businesses, they need the foot traffic.”

Johnny Vakalis, owner of Flinders Lane coffee shop The Journal Cafe is hoping a return to offices today means a return to weekday normality for his small business.

But with the flexible working week still in place for many businesses, he remains cautious.

“There is still a lot of uncertainty out there, but hopefully this is a step in the right direction,” he said.